Bohemians stand alone at the top after a goalless draw

The longest trip for an away match awaited Bohemians this week. The coach, Weber had to make a few changes to the starting line- up. Michal Šmíd could not play and was replaced by Jiří Ptáček. Jan Růžička took his usual spot at right back and Matěj Štochl played as an attacking midfielder instead of Petr Nerad. However, the opposition was forced to make even more changes, including a debut for the defender Jiří Homola.
However, you wouldn’t have known that the home side had been forced to make so many changes. It was in the third minute when they created the first chance and Sňozík had to make a good save. A 25-metre-long shot by Jakub Hottek rebounded just off the post; the keeper stretched and caught it. Just a minute later, it was Fiala threatening the goal again, but his header went wide.
Bohemians’ first chance came in the 20th minute. Josef Jindrišek found Matěj Štochl, sent a pass through; Štochl dribbled around the defender and went one on one with the keeper. The Karviná keeper showed some experience and saved it.
The increasing pressure from Bohemians created more chances. The great combination down the left hand side of the pitch by Bartek and Moravec culminated in a shot which went just wide.
The end of the first half saw the home side come more into the match. Mišinský dribbled behind Cseh and his shot was off target, then it was a free kick from Hottek, but Ptáček cleared. Jirouš sent a cross to Moravec but he couldn’t reach it and the first half ended goalless.
The second half saw a marked improvement in the quality of the play. Some 900 spectators saw more chances fall to Hottek from the home team, but the kangaroos’ defense didn’t relent.
Matěj Štochl put through a great pass and could have broken the deadlock but the home keeper remained strong. Then it was the home team on the ball, Mišinský put through a pass to Legierský but it went long.
The last minutes of the match were full of mistakes. Both teams were waiting for the final whistle. Bohemians, thanks to the loss of Znojmo, remain alone at the top of the table. 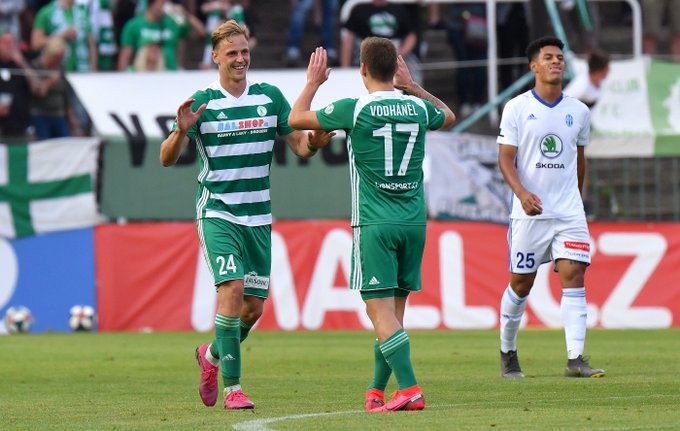